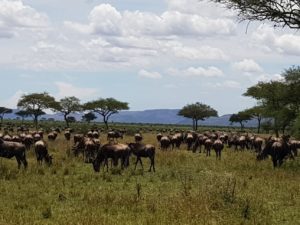 The annual migration of the herds of grazers in Northern Tanzania is one of the most amazing and spectacular events. Almost two million wildebeest and other grazes move through the Serengeti and Masai Mara ecosystems to other places, in search of greener lands. This migration is also considered amongst the greatest wonders of the natural world. The wildebeests migrate around the Serengeti is an ongoing circular motion event, and therefore you can see the great wildebeest migration in Tanzania all year round.

The reason behind the Great Migration- 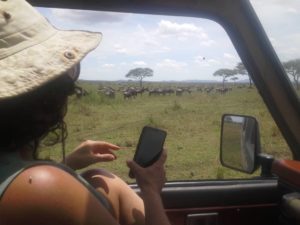 The great wildebeest migration occurs around the Serengeti, and into the Masai Mara for just one reason and that is the calving season that starts from December and lasts up till March. The cycle begins from the Southern Serengeti area of Ndutu and then rests wherever the grass is greener!

To know where the wildebeest should be at any particular time of the year; it is essential to keep an eye on the rainfall pattern. However, it is sometimes unpredictable as although they generally move from south to north of Serengeti, they often go zigzag along the way finding some greener spots.

Our wildebeest migration safaris in Tanzania-

Experiencing the migration is one of the most amazing things that you won’t forget in your entire life. We offer many safari packages for our travelers to experience this extraordinary feeling. You can also choose to add other sight-seeing packages to your tour that involves trekking, visiting the Serengeti National Park, cultural encounters by visiting the Maasai communities, and much more.

Plan your wildebeest migration safaris in Tanzania with us!